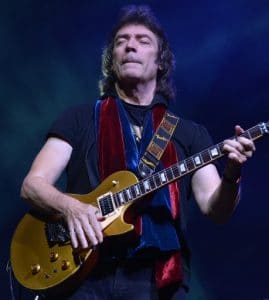 1. QUALIFICATIONS?
I passed some exams at school but I quit school at age 16 to get on with music.
2. CREATIVE LIFE HIGHLIGHTS?
The highlights of my creative life so far are… Joining Genesis, starting my solo career, working with people like Peter Gabriel and Richie Havens, discovering John Lennon loved an album I worked on, working with orchestras and starting a new aspect of my solo career along side my wife Jo, engineer / keyboard player Roger King and a fantastic team.
3. AMBITIONS?
I would love to tour with an orchestra, work with more people from around the world and score the next Dracula in Space movie…
4. SONGS YOU WISH YOU HAD WRITTEN?
I would have loved to have written Jimmy Web’s MacArthur Park or the Beatles’ Eleanor Rigby.
5. DESERT ISLAND DISCS?
My Desert Island Discs would be Ravel’s Bolero, Prokofiev’s Romeo and Juliet, Buffy Sainte Marie’s Must I Go Bound?, Sutherland Brothers and Quiver’s Arms of Mary and Queen’s Who wants to live forever.
6. FAVOURITE ARTISTS/BANDS OF ALL TIME?
My favourite artists and bands are The Beatles, Roy Orbison and Kate Bush.
7. WHAT MUSIC ARE YOU LISTENING TO NOW?
I enjoy much of Adele and Muse.
8. THE LAST BOOK YOU READ?
The last book I read was Jung’s Memories, Dreams, Reflections.
9. HOBBIES?
I love to read but also to travel. My wife Jo and I have recently visited, Peru, Thailand, Cambodia, Morocco and Mexico which shaped many musical ideas. But one place we often explore is Greece, particularly with regard to the ancient world and its myths. It’s inspired so much poetry and art and is a constant source of musical inspiration for both Jo and me.
10. VINYL, CASSETTE, CD, MP3, WEB STREAMING?
I prefer CD which for me has the best sound quality.
11. INDIE MUSIC IN THE AGE OF THE INTERNET?
It’s great that young Indie acts are not held to ransom solely by the demands of the music industry but can blaze their own trail with their own talent and new technology.
12. WHAT IS YOUR PERSONAL MOTTO?
My personal motto is: It’s never too late for anything. 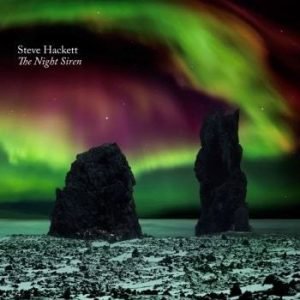 Guitar virtuoso and rock legend, Steve Hackett (formerly of Genesis), releases his latest album The Night Siren on 24th March 2017 through InsideOut Music (Sony). As implied in the title, The Night Siren is a wake-up call… the warning of a siren sounding in this era of strife and division.

The Night Siren showcases Steve’s incredible guitar playing as strongly as ever, along with regular Hackett collaborators and also musicians from several different countries who Steve invited to join him in celebrating multicultural diversity and unity. This includes singers from Israel and Palestine, who both actively campaign to bring Jewish and Arabic people together. There are also instrumentals from the USA and Iraq and a multiplicity of sounds, including the exotic strains of Indian sitar and Middle Eastern tar and oud, the ethnic beauty of the Peruvian charango and the haunting Celtic Uilleann pipes.

Steve is widely travelled, making friends everywhere he goes and has always embraced multicultural diversity. In these times of unrest, he has been inspired to express his belief that the world needs more empathy and unity. His wish to involve a range of musical sounds, instruments, musicians and singers from different parts of the world is both a development of his eclectic approach to music and shows how people can be brought together, even from war torn regions.

Talking about his latest work, Steve says, “This latest waxing represents a bird’s eye view of the world of a musical migrant ignoring borders and celebrating our common ancestry with a unity of spirit, featuring musicians, singers and instruments from all over the world. From territorial frontiers to walled-up gateways, boundaries often hold back the tide. But while the night siren wails, music breaches all defences. To quote Plato, ‘When the music changes, the walls of the city shake’.”

The musical journey takes us from ‘Behind the Smoke’, focusing on the plight of refugees throughout the ages, to the penultimate track ‘West to East’ which reflects on the damage of war and the hope for a better world. From personal to universal, the themes celebrate the life force, breaking free from chains of repression.

3. Fifty Miles from the North Pole

5. Other Side of the Wall

9. In the Skeleton Gallery

Steve Hackett is returning with an exciting new show Genesis Revisited with Classic Hackett for a 15 date UK tour in April 2017.Celebrating the 40th anniversary of the classic Genesis album Wind and Wuthering, Steve and his band will be performing several tracks from the album as well as fan favourites such as ‘The Musical Box’ and other Genesis numbers never performed before by Steve’s band including ‘Inside & Out,’ ‘One For The Vine’ and ‘Anyway’ as well as material from The Night Siren. 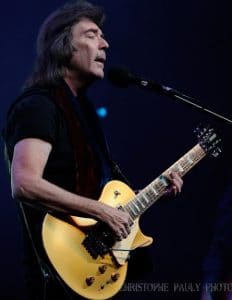 Steve Hackett is renowned as an immensely talented and innovative rock musician. He was lead guitarist with Genesis as part of their classic line up with Gabriel, Collins, Banks and Rutherford, who produced several of the band’s most acclaimed albums including Selling England by the Pound (a favourite of John Lennon) and The Lamb Lies Down on Broadway. With Steve’s extraordinary versatility in both his electric guitar playing and his composing, he involves influences from many genres, including Jazz, World Music and Blues. He is equally adept in his classical albums that include renditions of pieces by composers from Bach to Satie, his own acoustic guitar compositions that have gained the admiration of many, including Yehudi Menuhin, and ambitious guitar/orchestra albums such as A Midsummer Night’s Dream, recorded with the Royal Philharmonic.

The Night Siren was released through Inside Out Music on 24th March in the following formats: