We could say that THE VOYAGE LIMPID SOUND occupy a special place in the Greek rock discography. And this is a notion well known to those who have followed their, almost underground, 13-year record making and their live happenings.
Basically, TVLS are the Masters of microcosm crafting.

“Nightly Sing Songs” is the new microcosm of TVLS.Officially their third (eighth, including the unreleased) record, NSS is a concept album of a song-cycle based on a surreal, social parable with an unlike for the Voyage back to basics approach. It was recorded mainly live in the studio, on tape, in order to capture the earthly, organic feel of “Nightly Sing Songs”. The rare, highly melodic nature of NSS, paying its dues to the song writing o Franz Schubert and Hugo Wolf, through the progressive sonic landscapes of Brian Wilson and the Pink Floyd, and the wickedly twisted humour of the text compose a secretly lit music vesper. 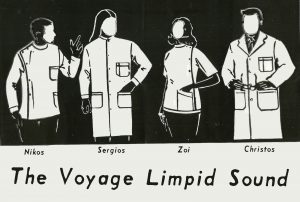