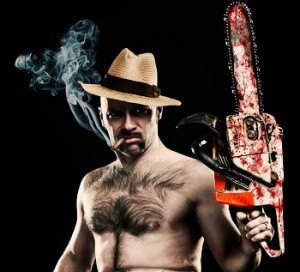 1. QUALIFICATIONS?
Musically, self-taught: I studied composition and musical theory at home, every day for several years after dropping out of art school. I was fed up with institutions, especially art institutions, and wanted to develop an unspoiled naiveness as a composer.

2. CAREER HIGHLIGHTS?
Commercially, Neo Dada from 2009. It connected with something in time – since the term ’neo dada’ points at an art direction – creating discussions worldwide: “do we need A NEW neo dada?” and stuff like that. Even The Guardian picked it up. Funny, I didn’t see that coming. But for me personally it is the orchestral performance of a piece I wrote for Trondheim Sinfonietta in 2014, and my latest release Melody Of A Muddled Mason (2015). Anyway, all is in the past. Now is most important.

3. AMBITIONS?
I write all my music in scores, both for my band and for other artists and orchestras. At the moment I think I have material for at least three or four albums. My first ambition is to figure out how to release all that music. And I’m also working on making my band even better after 16 years, and get back on the road soon. Touring in Europe. Hopefully also Greece.

4. SONGS YOU WISH YOU HAD WRITTEN?
Hehe, there’s too much good stuff in history to even start thinking about it if we had to go that way… Fortunately for me, I’ve grown past that kind of thought, and I don’t wish for anything else than that what I do.

5. DESERT ISLAND DISCS?
Shostakovich’ complete string quartets by the Borodin String Quartet (a recording from the early eighties), Trout Mask Replica by Captain Beefheart, Burnt Weeny Sandwich by Frank Zappa, Hunky Dory by David Bowie, Nursery Chryme by Genesis, Lark’s Tounge In Aspic by King Crimson, All Things Must Pass by George Harrison, High Voltage by AC/DC, Out Of The Blue by Electric Light Orchestra, Remain In Light by Talking Heads, Aquiring The Taste by Gentle Giant, Nilsson Schmilsson by Harry Nilsson, Peter Gabriel 2 (Scratch) by Peter Gabriel, The Complete Works of Edgard Varèse, Pulcinella, Rite Of Spring and Petruchka by Igor Stravinsky and Brunost No Igjæn by Knutsen Og Ludvigsen. And Breathless by Camel.

7. WHAT MUSIC ARE YOU LISTENING TO NOW?
At the moment, while writing, Camel’s The Snow Goose.

8. THE LAST BOOK YOU READ?
A book on Indian philosophy. The last novel was You’re an Animal, Viskovitz by Alessandro Boffa.

9. HOBBIES?
I both paint and write a lot. Secondary I enjoy skiing when I have time for that. And I relax by solving the rubric’s cubes, over and over again (don’t laugh). Just finished the 5x5x5. I see some similarities with complex music and complex puzzles.

11. INDIE MUSIC IN THE AGE OF THE INTERNET?
I just watched the yearly Norwegian Grammy, Spellemannprisen, and got pissed, envious and grumpy (the Indian philosophy book was forgotten fast). So I say: The indie music field in the age of the Internet is over-crowded and doomed, but nevertheless still going strong. This means we’re actually in the age of “debutants” and “new hopes” who’s 15 minutes of fame is overtaken by another newcomer mayfly shortly. The Internet is both visualizing and breeding this. You can be who ever you want to be, invent yourself. But, and that is strange, even though we have all the opportunity to promote ourselves in the Internet 2.0, most artists’ problem is being too stereotype, even the “alternative” ones. 99,9% of all good artists (let’s forget about the bad ones) are conceptually weak. If an artist or a band want to get attention, they have to represent a new thought, a new state of mind, some kind of rebel. I have thought about what Pussy Riot could have been if they were really good. They have a strong political concept, but their music is preposterous by itself ….. But this was very negative… Forget what I said, and create music.

12. WHAT IS YOUR PERSONAL MOTTO?
Win without participation

Melody Of A Muddled Mason 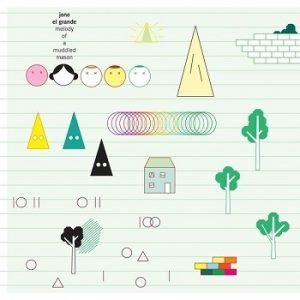 Strictly one off limited pressing on exquisite mint green vinyl. Comes with the CD inserted. “Melody Of A Muddled Mason” is the natural successor to “Neo Dada”, Jono´s masterstroke from 2009. Some of Jono´s finest writings can be found here, and he has refined his already considerable arranging skills to perfection, just listen to Bach’s Beach and the title track for evidence. Jono lists movements like Rock in Opposition and the Canterbury scene and artists and composers like Frank Zappa, Stravinsky, Magma, Henry Cow and Gentle Giant as sources of inspiration. With his releases and stage shows he has now established his own signature, with mature compositions, refined arrangements, improved guitar playing and the introduction of subtle vocals. “Melody Of A Muddled Mason” is the sound of a composer and producer at the peak of his powers. The mint green vinyl and Kim Hiorthøy´s strikingly original artwork completes this extraordinary release.

Norway’s Jono El Grande is something quite different. He’s a self-taught musician whose musical creations clearly fall into the Avant-Prog and Canterbury genres. The music owes much to certain periods of Frank Zappa with its use of Vibraphone and sax not to mention Grande’s bass monotone vocals stylings. I will tell you at first I wasn’t planning on reviewing the album thinking it didn’t really fall in line musically with what we do here at the Progressive Rock Files, however the more I listened to the albums six tracks, it’s a short thirty-five minutes by the way, the more I was intrigued by the crazy music. While there are plenty of over-the-top musical histrionics, there are equally many times where thematic melody wins the day and songs come out of the craziness and blossom into some extremely engaging tuneful compositions. It’s herky-jerky, it’s jaunty, it’s noisy but most of all its very musical. Everyone is performing at a high level, which is required because playing this type of complex music can’t be easy. Much of the album is instrumental but Grande’s vocals pop in here and there. I particularly liked his use of dreamy double-tracked vocals in the title track “Melody of a Muddled Mason” [9:17]. It’s a slow and plodding piece that bursts into some searing distorted guitar leads at about the four minute mark. But hey at over nine-minutes there are plenty more musical change-ups that radically alter the composition’s musical direction. It’s not the type of music I listen to regularly, but as I say there is something quite captivating about Jono El Grande and if you’re looking for something a little out of the ordinary and no afraid of a little angularity and dissonance presented in a more light-hearted fashion this is a good bet.

source: The Progressive Rock Files (US)

Here is an album completely out of left field. The artist is Norwegian musician and composer Jono El Grande and the album is titled Melody Of A Muddled Mason. The artist has been recording since 1999 and the release of his debut Utopian Dances. According to the artist he has been influenced by artists like Zappa, Gentle Giant, as well as the Canterbury Scene and RIO movements. After listening to Melody Of A Muddled Mason one thing became clear, it is an album of unbridled quirkiness with incredibly smart arrangements and excellent musicianship zigzagging between experimental art rock and avant prog. If there ever was an album difficult to pigeonhole it is this one. It is both melodic and discordant and I think that is what makes this so special. For an experimental rock/pop album that is so damn listenable it is a testament to the players ability to make off kilter music stick in your brain. The first track “Bach’s Beach” is a prime example. Quirky guitar and bass and Grande’s low baritone vocals make for a provocative listen with vibraphone adding a youthful playfulness. The music veers in different directions; experimental, progressive, classical, jazz, pop and rock music are all touched upon. The title track has a darker feel with strings adding a denser layer of sound. Eerie background effects and wild guitar extrapolations make for a truly unsettled listen. The third track “Lament X” is a short solo violin interlude with a classical bent. The quirkiness continues with “Violent Water Promenade” featuring a tasty bass and guitar groove and soaked with violin and cello. In “Abiding Swansong” there are equal doses of Rhodes, vibraphone sax giving this one an eclectic yet strangely catchy vibe. The more I listen to Melody Of A Muddled Mason the more I like it. Its complexity is not easy to get on first listen but over time I think anyone who appreciates the eclectic side of rock and pop will really dig it.The musicians are:
Jono El Grande (guitars, vocals, percussion, farfisa, piano)
Erik Løkra (alto, tenor and baritone saxophones, flute)
Anders Kregnes Hansen (vibraphone)
Torgeir Koppang (Fender Rhodes)
Terje Engen (drums)
Eivind Henjum (bass)

Jono El Grande is the stage name of Jon Andreas Håtun (July 29, 1973 – ).
Jono El Grande is an autodidactic Norwegian composer, band leader, guitarist and conductor. He cites as his major sources of influence Captain Beefheart, ’60s Frank Zappa, King Crimson, Igor Stravinsky and Art Rock.
Although Jono El Grande is enjoying modest growth on the European avant-garde scene, he is most well known in his own country for his eccentric and amusing performance art/dada-inspired live shows. In 2000 he formed The Jono El Grande Orchestra, renamed Jono El Grande & The Luxury Band in 2005. From 1995 – 1998 he formed various band projects leading to the presence of Jono El Grande & The Luxury Band: Menü Tizz Aura (1995 – 96), The Gringo Quartet (1996), Grande Corpse (1996), Vidunderlige Vidda (The Wonderful Mountain Plateau or La Dolce Vidda) (1996 – 98). In the years 1990 – 1992, Jono El Grande assembled a series concept bands intended for one-night performances and recordings and/or rehearsings only: Mannes Fatales, The Terror Duo, Black Satan, The Pez Dispensers, Acetaded Beat, As Drosera in addition to a handful of school bands formed to mark end-of-term celebrations and similar occasions.
Jono El Grande has released five albums in addition to contribute with compositions on other projects (both Rune Grammofons anniversary albums “Money Will Ruin Everything 1 & 2” and on “Wire Tapper #21”, the avant-garde music magazine The Wire’s 21st edition of their CD series). Jono El Grande served as festival composer for Happy Days 2007, presented by Ny Musikk, the Norwegian section of ISCM – International Society For Contemporary Music.