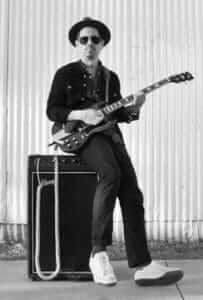 2. CAREER HIGHLIGHTS?
There have been too many to name, but among them: backing up and performing with Prince, working with GZA, producing an album for Daniel Johnston and making music with some of my best friends for over 15 years.

3. AMBITIONS?
As I get older the ambitions become more practical and realistic, such as continuing to support my
family with my music in an increasingly unpredictable music industry. I am a constant student of music and am always striving to do something better than my last work.

4. SONGS YOU WISH YOU HAD WRITTEN?
George Michael – Careless Whisper

7. WHAT MUSIC ARE YOU LISTENING TO NOW?
A lot of “lowrider soul”,

8. THE LAST BOOK YOU READ?
J-Zone – Root for the Villain

10. VINYL, CASSETTE, CD, MP3, WEB STREAMING?
All of the above (I have a cassette player in my truck) except for maybe CD.

11. INDIE MUSIC IN THE AGE OF THE INTERNET?
Many different outlets now, don’t really feel like there’s an exact formula, but I’ve been really into vinyl and directly supporting indie artists via Bandcamp, with a little bit of streaming when it’s the most convenient.

12. WHAT IS YOUR PERSONAL MOTTO?
Don’t know if I have one but really like Picasso’s quote “Art for art’s sake is the philosophy of the well-fed.”

A lot can happen in five years. For producer Adrian Quesada, the last five years included a Grammy win with his ex-band Grupo Fantasma, forming a new band with members of City and Color and My Morning Jacket under the name Spanish Gold – releasing a critically acclaimed album which then lead to an appearance on the David Letterman show. This is just the tip of the iceberg when you start to list the catalog of records the producer has worked on. Quesada’s body of work ranges from having worked on albums for Natalia Clavier, Daniel Johnston, The Sword and David Garza or the extensive touring he did with long time band Brownout: the Ozzy Osbourne approved Black Sabbath reworking as Brown Sabbath, backing GZA (Wu-Tang Clan), or the countless sessions and collaborations as a guitar player. Quesada has kept quite busy since releasing the first Echocentrics album, Shadows in 2011.
The Echocentrics is what Quesada considers to be the closest thing to his solo project. He explains, “I write songs and record them on every free day I have, I have 4­-5 albums worth…and send them to some of my favorite singers.” Echo Hotel features a few of the same artists from the first Echocentrics album including Natalia Clavier (Thievery Corporation) and Tita Lima (daughter of Os Mutantes’ bassist Lihminia) as well as Alex Maas (Black Angels), Austin songbird Jazz Mills, James Petralli of White Denim and singer-songwriter Bill Callahan (Smog).

Echo Hotel is a direct reflection of the everyday influences the Austin, TX based Quesada found in his South Texas upbringing. With songs in Portuguese, Spanish and English, Quesada explains, “Everyone in my hometown (Laredo, TX) is bilingual, people have complete conversations with one person speaking Spanish and the other English, so to me language barriers don’t really exist.” The album takes listeners on a sonic journey. It’s psychedelic, cinematic, at times soulful, dusty, while never losing the unique productions that make it uniquely Quesada’s.