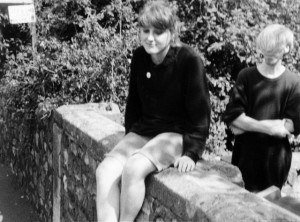 1. QUALIFICATIONS
I’ve got an Economics degree that I did when we were running Sarah, and then I qualified as a Chartered Accountant in 2000, five years after the label ended. I don’t have any music qualifications, obviously – well, only Grade 2 violin.

2. CAREER HIGHLIGHTS?
It’s difficult this, because I’ve enjoyed a lot of what I’ve done since we stopped running Sarah 20 years ago – I like being an accountant! – but in terms of highlights, they’re all quite dull. We had an exhibition about Sarah at the Arnolfini Gallery in Bristol last year, and that was probably the highlight – we always wanted Bristol to notice us and our love for the city, and it felt like finally it did.

3. AMBITIONS?
Well I’ve always wanted to write a novel, not sure if I have it in me though.

4. SONGS YOU WISH YOU HAD WRITTEN?
I’m so far from being able to write songs, but… I’d settle for “If She Doesn’t Smile…” by Fantastic Something.

5. DESERT ISLAND DISCS?
Well, I’d definitely have some Sarah ones in there because they’ve been so much of my life, and have stood the test of time really well.
1. The Sea Urchins – Pristine Christine – because it was the start of it all.
2. The Field Mice – Between Hello and Goodbye – because it speaks to a certain point in my life.
3. You Trip Me Up – a bit of noise and anger.
4. Teenage Kicks – because after I first heard it on John Peel (long after it was released), I went into our local record shop and tried to buy it, and learnt the harsh lesson that records got deleted.
5. I need some Wedding Present or Cinerama, but so many great records to choose from – David’s been a friend for a long time, so having one of his records on my desert island will make it a bit less lonely.
6. I Will Survive – a bit of inspiration.
7. The Book Lovers by Broadcast I think.
8. Mario’s café by St Etienne.
Wow, that was hard – don’t make me choose the one that doesn’t get washed away by the tide !

6. FAVOURITE ARTISTS/BANDS OF ALL TIME?
I’m quite predictable (and ignoring everyone on Sarah) – The Pastels, The Jesus and Mary Chain, Prolapse, Broadcast, Dweeb, Huggy Bear, McCarthy, The Smiths, Pulp, Ballboy, Cinerama.

8.THE LAST BOOK YOU READ?
The Joy of Tax – but mostly I read fiction. I’ve been reading a lot of thrillers lately, and a lot World War 2 fiction. I love people like Nicola Barker, Kate Atkinson, Niall Williams, Sarah hall – I really like reading things that are bang up-to-date contempory, Douglas Coupland is good for that.

9. HOBBIES?
I’m a walker. I like the exercise (but I don’t like strenuous exercise), views, fresh air, countryside, city, urban edgelands. And then reading, I read all the time.

11. INDIE MUSIC IN THE AGE OF THE INTERNET?
Well, so much has changed in the 20 years since I stopped running a record label, I’m not really sure. Bands have to try harder to get noticed I think – and then they’re so grateful and polite when you see them live, it’s lovely but there’s no real fuck-you anymore.

12. PERSONAL MOTTO?
Oh, I’m not a personal motto kind of person, we don’t do that sort of thing in Yorkshire where I grew up. I just kind of get on with stuff. 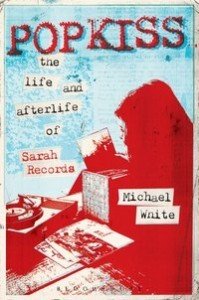 the Life and Afterlife of Sarah Records
by Michael White

From 1987 to 1995, Bristol, England’s Sarah Records was a modest underground success and, for the most part, a critical laughingstock in its native country—sneeringly dismissed as the sad, final repository for a fringe style of music (variously referred to as “indie-pop,” “C86,” “cutie” and “twee”) whose moment had passed. Yet now, more than 20 years after its founders symbolically “destroyed” it, Sarah is among the most passionately fetishized record labels of all time. Its rare releases command hundreds of dollars, devotees around the world hungrily seek out any information they can find about its poorly documented history, and young musicians—some of them not yet born when Sarah shut down—claim its bands (such as Blueboy, the Field Mice, Heavenly, and the Wake) as major influences.
Written with the full blessing and participation of Sarah Records’ founders and artists, this biography of an unlikely cult legend features dozens of exclusive interviews with the music-makers, producers, writers and assorted eyewitnesses who played a part in Sarah’s eight-year odyssey. It includes photos throughout, many of which are previously unpublished.
About the Author
Michael White has been writing about popular and underground music, for publications in his native Canada and internationally, for 20 years.

My Secret World. The Story Of Sarah Records is the first feature length documentary to explore this influential and often misunderstood label. Now the label founders, former Sarah band members, music critics and those that have been inspired by the label tell their story.The production of this documentary has been made possible by the generosity of everyone involved; the artists who’ve permitted their music to feature in the soundtrack, the interviewees for their time and help, the film makers who helped film the interviews and the Sarah fans who donated archive footage and photographs.

Directed and funded by Lucy Dawkins.

My Secret World: The Story Of Sarah Records is streaming online at