1.QUALIFICATIONS?
None at all, I got expelled from school when I was 15.
2. CAREER HIGHLIGHTS?
I think that would be the time the Bevis Frond were Country Joe McDonald’s backing band at the Queen Elizabeth Hall in London. My son, Aaron, was drafted in on keyboards and guitar to augment the band when he was about 16 and got an ovation for a guitar solo. I was a very proud father.
3. AMBITIONS?
I honestly don’t have any. I just feel lucky to have had the life I’ve had.
4. SONGS YOU WISH YOU HAD WRITTEN?
Oh there are so many. I’ll choose just one or I could go on all day. How about Lennon’s “In My Life”?
5. DESERT ISLAND DISCS?
Once again I could easily choose 10 selections but off the top of my head I’ll go for: Beach Boys – Surf’s Up, Beatles – Tomorrow Never Knows, Joni Mitchell – Marcie, Nine Inch Nails – Hurt, Jackson Browne – For a Dancer, Rolling Stones – Gimme Shelter, Sandy Denny – Who Knows Where the Time Goes, Bob Dylan – Most of the Time.
6. FAVOURITE ARTISTS/BANDS OF ALL TIME?
Well the Beatles have to be top of the list plus Hendrix of course, The Band, BobDylan, PhilOchs, The Grateful Dead, Beach Boys, Early Elvis….I could go on and on..
7. WHAT MUSIC ARE YOU LISTENING TO NOW?
I’m in the middle of a Bluegrass period at the moment. I’m listening to a lot of classic artists like The Stanley Brothers, Flatt and Scruggs, Bill Monroe and so on. Astonishing instrumentalists and singers.
8.THE LAST BOOK YOU READ?
I just finished “All the Songs”, a breakdown of every Beatles track ever recorded using their studio notes. An interesting book to dip into.
9. HOBBIES?
Mostly moaning about the state of the world if you consider that a hobby.
10. VINYL, CASSETTE, CD, MP3, WEB STREAMING?
I’m old school so CDs and MP3s for me.
11. INDIE MUSIC IN THE AGE OF THE INTERNET?
Well, I have a new solo album out which as well as a CD version is also on Spotify, iTunes and so on so I guess I’ve been dragged reluctantly into the digital age. I even cracked and joined Facebook…….
12. PERSONAL MOTTO?
Treat people the way you wish to be treated yourself.
Adrian Shaw’s answers to the MW Questionnaire as in December 2014
Adrian Shaw
“Colours”
Preamp Records – CD precd01 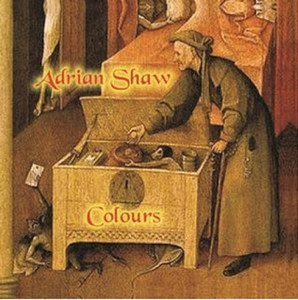 Although his C.V. reads like one of Pete Frame’s Rock Family Trees and he’s been recording and playing in bands for nearly 50 years, this is “only” Shaw’s seventh solo outing. Along with stints in Hawkwind/Hawklords, Mick Farren and The Deviants, and Magic Muscle, Shaw has contributed his subtle-yet-melodic anchoring bass lines to releases from Anton Barbeau, Tom Rapp, Keith Christmas, Country Joe McDonald, and longtime mates, Rod Goodway and Bari Watts. And, of course, he has held the bass position in The Bevis Frond for the past quarter century! With a pedigree like that, it’s safe to say that Shaw can play just about anything that his bosses require – folk, psych, rawk… he’s even featured in the band that recorded the soundtrack to a Dutch porno film, and plays tabla and drums on one of Pete Pavli’s [High Tide] solo albums and trumpet(!) on Gong vocalist Gilli Smyth’s latest.
In spite (or perhaps because) of his faithful duties in someone else’s band, Shaw’s solo albums always seem to be completely different kettles of fish from what we’re used to hearing him play. Left to his own devices (and despite a few contributions here from old Frond friends like Nick Saloman and Bari Watts, Shaw usually plays all the instruments on his albums), his solo work seems more melodic and introspective, with poignant, seemingly autobiographical lyrics about his place in the world. With titles like ‘A Clean Slate’, ‘When I’m Gone’, ‘The Divine,’ and ‘The Question of Life’, he also seems to be getting his affairs in order, although we hope he’ll continue to grace his (and Frond) albums for many years to come.
Opening with J. Robert Oppenheimer (“the father of the atomic bomb”) quoting the Bhagavad Gita about “becoming death” and “destroying worlds”, the title track is a litany of conquered vices (drugs, war, medical maladies, etc.), with Shaw’s chosen profession showing him life’s highs and lows, but “it’s all I ever wanted to do”. Perhaps looking back nostalgically on the innocence of youth (before the Summer of ’67 changed everything as suggested by another sound clip), the song ends with the League of Ovaltineys’ theme song, ‘We Are Ovaltineys’ (“We’re happy boys and girls!”) Perhaps Ade was a member?!
Watts whips off a searing solo on ‘A Clean Slate’, much like his similarly deputised turn on The Bevis Frond’s ‘Once More’ (Inner Marshland, 1987), and the Frond himself, Nick Saloman, plugs in and let’s his freak flag fly and nimble fingers bleed with a flashy, blistering solo on ‘When I’m Gone’. And to complete the triumvirate of guest guitarists, Shaw’s son Aaron holds his own amidst his more notable six-string slingers with a tasty workout that adds the finishing touches to ‘The Divine’.
Shaw can get reflective when he wants to, and ‘Going Home’ is a contemplative mood piece with a distinctly Floydian flavour, and Pavli’s viola adds an elegant baroque air to the atmospheric ‘The Dream’. ‘Be Not Weak’ drops some backwards vocals and effects into the swirling arrangement that seems quite Lennonesque (cf. Revolver, Sgt. Pepper) and there is a sweetly mellifluous streak running through the dirgy ‘So It Goes’ that suggests hope lies within its resolute conclusions.
Taking a page out of Tom Rapp’s early Pearly Before Swine covers, Shaw adorns his album in detailed segments from Hieronymus Bosch’s “Conjurer” and “Death and The Miser”. Both of which suggest hidden secrets and deceptions, just like many of the songs he’s written here, although interpretations of the latter have suggested Bosch was continuing a theme set out in the “Garden Of Earthly Delights” and is emphasizing the “Miser”’s reflection back on the events of his life as he prepares to pass on into another realm (e.g., heaven). The thematic exploration of death is quite pronounced throughout Colours and Shaw has couched his tales and reflections in warm, organic melodies and arrangements that will remain long after the CD is returned to its jewel case.
(Jeff Penczak)