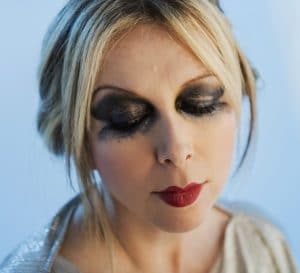 1. QUALIFICATIONS?
I went to High school got GCSE’s and A Levels, and then studied Art Foundation but as I applied to go to University I got a record deal with my band when I was 19 so thats where my formal qualifications end, I haven’t got any music qualifications either!
2. CREATIVE LIFE HIGHLIGHTS?
I suppose, travelling and working in different studios with great musicians and friends, the fact that I get to release albums is a thing I’m very grateful about and playing in different places around the world, in fact I played in Athens at Bios a long time ago and my husband Dj’d there a few times..always a good place and nice people! I feel privileged to have seen some amazing gigs and artists in my time and some of these wouldn’t have happened if I wasn’t a working musician and playing at festivals or having a community of friends all over the world because of music! I saw Jean Claude Vannier perform at the Barbican and the Hollywood Bowl its was a combination of his solo stuff and Gainsbourg, that was quite an emotional experience, definite highlight. Im also so eternally happy that I saw Kate Bush play in London it was so amazing and I cried a lot but I’ll never forget it, such a joy.
3. AMBITIONS?
I will always be a writer as its not something I’ve ever stopped doing but maybe do more art and painting, as that stopped because music became more consuming, I find it hard to do both with the same concentration, so maybe I will have to split the year in two! I would also like to build my own recording studio and arts space its a dream alongside having a little farm and some animals to look after!
4. SONGS YOU WISH YOU HAD WRITTEN?
I love pop music so something like..
I feel Love- Donna Summer/Giorgio Moroder
No Scrubs-TLC
5. DESERT ISLAND DISCS?
I think it would quite mellow and laid back… Lizard in a Womans Skin, La Lucertola- Morricone Cloudbusting-Kate Bush, Get Thy Bearings- Donovan, The Partisan- Leonard Cohen, La Ritournelle -Sebastien Tellier.. that kind of thing.
6. FAVOURITE ARTISTS/BANDS OF ALL TIME?
I suppose David Axelrod, Hawkwind, Kate Bush, Pink Floyd, Morricone.
7. WHAT MUSIC ARE YOU LISTENING TO NOW?
A lot of Lebanese and Eqyptian music, theres so many wonderful female arabic singers, I don’t understand the language and I cant sing that way but I love the inflection of the voice , its more orchestral and traditional music I like, its mysterious and eastern strings alway have an air of beauty.
8. THE LAST BOOK YOU READ?
Cosey Fanny Tutti – Art Sex Music
so good I read it in 3 days, I recommend it, its very provocative in places but not unpleasant to read because the author is very ‘matter of fact’ about it.
9. HOBBIES?
I like to go running in the park, I like to look at the trees..breathe the air.. its great for my mind. I also like to look at books about Scandinavian furniture design and modernist houses, I think my forefathers are Nordic because I am so attracted to that part of the world!
10. VINYL, CASSETTE, CD, MP3, WEB STREAMING?
I think vinyl is the best, but how wonderful that we have so many formats for people to listen to music, I still think web streaming is a rip off for artists and people who’s business it it to sell physical product, but I’m not against it, I listen to music in every way possible..and so this must be a good thing?
11. INDIE MUSIC IN THE AGE OF THE INTERNET?
I think its great that we can access all this information and reach people all over the world its a community and on the surface feels creative, although part of me dies a little when people talk about ’statistics/ click rate and impact date’, I know its essential information for marketing and business but when someone asked me to once tweet about them at a certain time ‘for the click rate’ I laughed.
12. WHAT IS YOUR PERSONAL MOTTO?
I do have a motto but it only applies in context of when I am struggling creatively I kind of encourage myself to be in my own bubble to focus on what is in your head, there are so many distractions so I say ‘Take no notice of the world outside’ but obviously I don’t mean don’t engage with the world, its just to concentrate for a while! 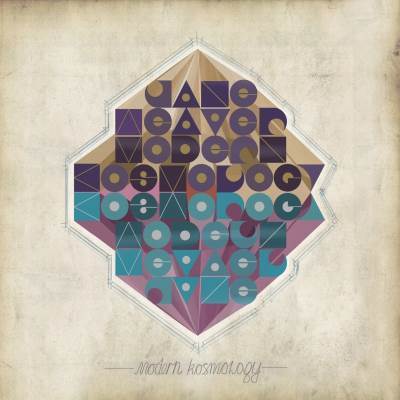 Jane Weaver is Metamorphosing… Very alone in a home-spun cocoon with a metronomic heartbeat and the phasing voice of her former and future selves. This is the real sound of solitude but far from silence. One voice, a vulnerable pulse, channeling a lifetime of human experience via melodic codes, naked with multicoloured wings and expanding drum-drones. The comfortably claustrophobic opening track of Jane Weaver’s sixth studio album reveals a genuine experimental-pop artist in absolute control of her own intimate vessel, a songwriter and composer whose craft communicates and illustrates, vibrant within her first articulate strokes. In its sweetness, this is an ability that transcends style, politics and egotism and one that only comes with life-experience and the ability to learn, grow and fantasise in private and public alike. For those that have followed her detailed career, Jane Weaver is progressive rock in its purest molecular form. Fossilised in ferric, the crystal in the concrete. Magnetic, melodic, folkloric, unapologetic and rhythmic in her discipline. 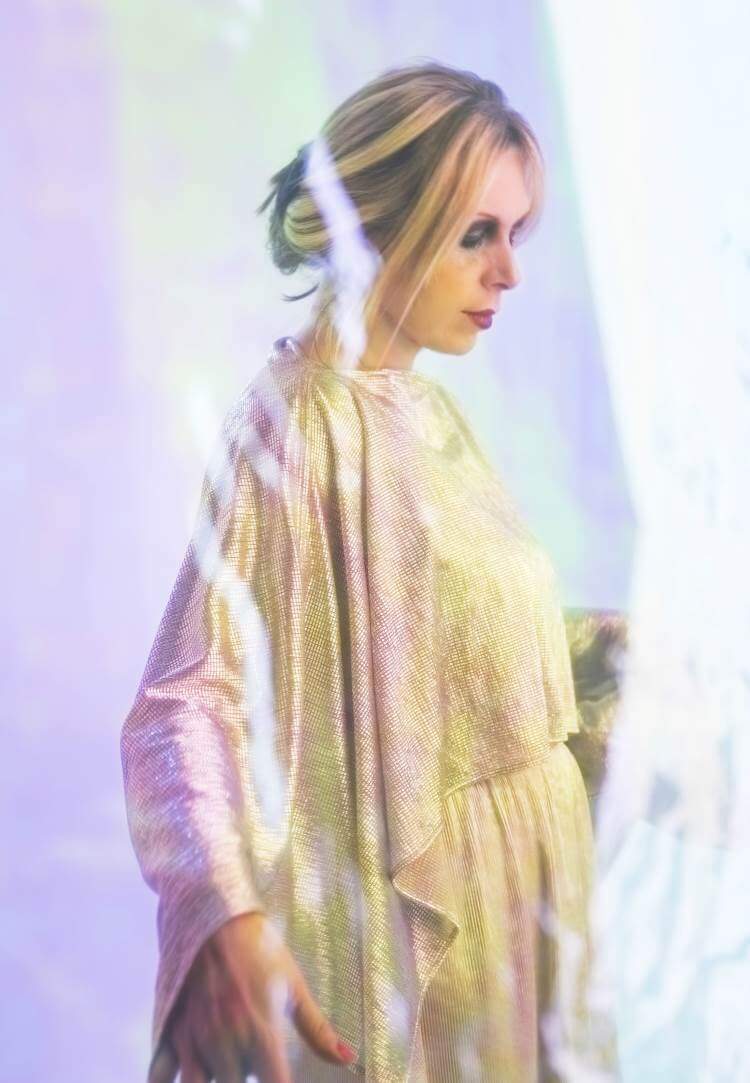 Modern Kosmology is the result of a scientist of popular song gone rogue. Here we find a model student of second-hand Kraut-rock, female punk, hard-subbed new-wave, synthesiser skip-finds and unpronounceable worldly feminine pop who’s finally reached her eureka moment. From science to séance, Modern Kosmology sees Jane Weaver’s melodic-protagonist channeling new depths of creative cosmic energy within. After the huge critical acclaim of 2012’s Fallen By Watchbird, followed by 2015’s exploratory “Silver Globe” LP winning her unanimous “record of the year accolades” and hefty measures of radio play-listing Jane Weaver’s conceptual trajectory has sent her neo-kosmische penchants to the point of no-return. Flown too far from the nest into a wider vista where brave melodic feminine songwriting meets robust synthesis, brutalist composition and Letterist informed song-structure… this album, for many, might be the post-grad psychedelic pop album they never thought would happen. Like dreams, Jane Weaver’s songs come to her “like fully-formed pictures” she explains, but only now, with a discography that spans 3 decades, has she taken concentrated and uninterrupted recording time to focus on a genuine studio album from start-to-finish. Recorded using genuine all-analogue vintage machinery, Weaver balances the obscure against the unpredictable matching every beat with every considered syllable in a 40 minute opus comprising her best lyrical songwriting to date. Songs like H>A>K and The Architect match aero-lite melodicism with pounding rhythm tracks evoking vivid images of early Modernist art, Archigram blue-prints with a rigid back-bone of Eames worthy construction. In tracks like Slow Motion and The Lightning Back, Weaver combines subtle patch-bay arpeggios combining the stylings of Wendy Carlos and (previous collaborator) Suzanne Ciani with yearning lyricism and the type of agile melodics seldom found in synthesised pop music. Other organic tracks on the LP combine awkward twangs and dystopian dirge to expose Weaver’s knowledgeable grasp on early European prog with the angular Faustian / Can pang of Loops In The Secret Society and the commune rock evocation of Ravenspoint, a seasoned reduction of Amon Duul, Ash Ra and Acanthus. The album’s title track however will tick multiple boxes for fans of all the aforementioned micro-genres with one of Weaver’s most intimate performances to date combining crystalline vocals with swells of electric organ, crooked rhythms, spiked psych guitar and spectral radiophonic effects challenging the best in obscure Swedish acid-rock and Elephants Memory’s soundtrack psych… possibly a compliment at it’s most monarchial. Self taught, self penned, self played, self produced, and all-autonomous Jane Weaver’s Modern Kosmology, however, is by no means a reclusive mission. Heavily influenced by a cast of lesser-known spiritual muse (such as automatic abstract painter Hilma Af Klint and her fabled pre-surrealist secret society) Jane also enlists the physical skills of CAN’s Malcolm Mooney amongst a skeleton crew of Mancunian drum-lords and well versed psychedelic axe-men to punctuate Jane’s synth-loaded sonic architecture. Jane Weaver’s unwaning yearning for psychoactive pop energy has just reached a new level of magnetism. As snowclones go, Modern Kosmology is the new Silver. Another Spectrum to add to the tension.

Jane Weaver also announces shows in the UK,
ahead of more extensive UK and European touring
to be announced later in the year. 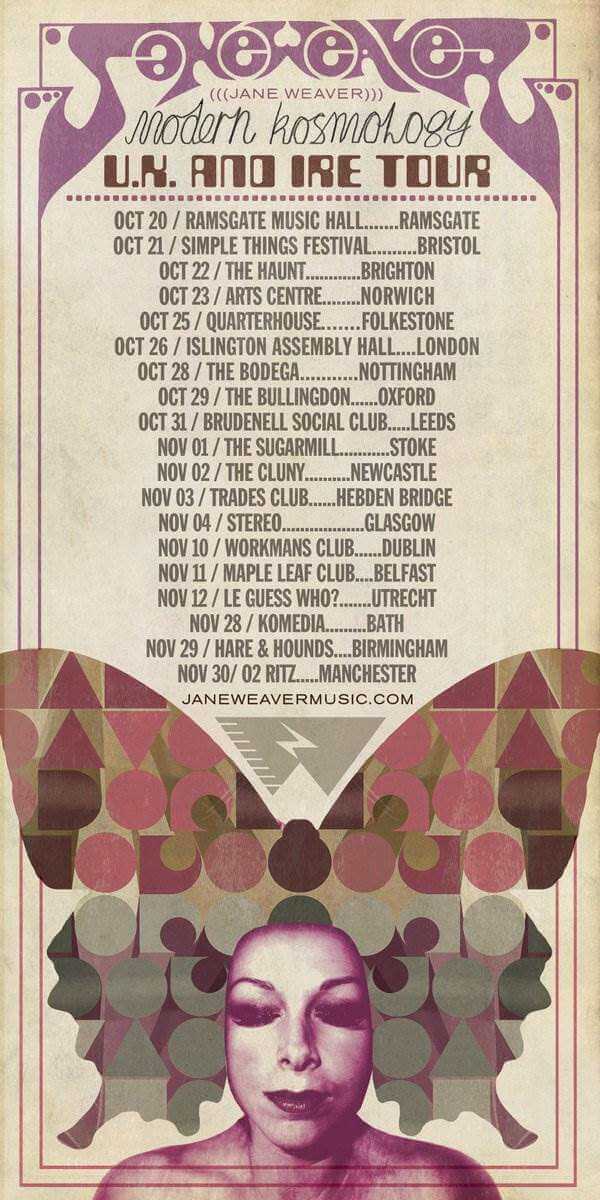