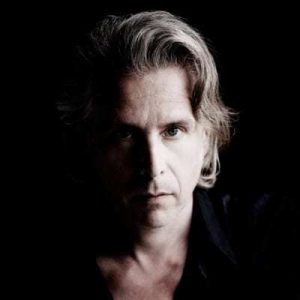 1. QUALIFICATIONS?
Nothing that bears any relation to making music, unless you count Grade 5 on the violin. I dropped out of a Philosophy Degree when I was about 20, then spent several years dreaming about and plotting how to get a band together.

2. CAREER HIGHLIGHTS?
Having Jean-Herve Peron carve into my beloved guitar with a chainsaw as I was playing it was a pretty memorable moment. Happened a few years ago while I was playing with Faust.
(image attached) 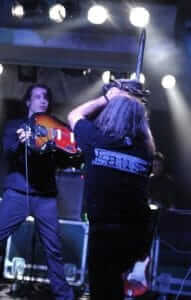 3. AMBITIONS?
Keep making music in some form or another.

4. SONGS YOU WISH YOU HAD WRITTEN?
As far as admiring songwriting goes, Waterloo Sunset by The Kinks is a tremendously beautiful song, succinct writing that goes straight to the heart. A good example of a tear-jerking song in a major key

7. WHAT MUSIC ARE YOU LISTENING TO NOW?
The dishwasher.

8. THE LAST BOOK YOU READ?
Albert Camus – Exile And The Kingdom.

9. HOBBIES?
I love walking in London, along the river, or just getting lost in town. I don’t know if that classes as a hobby, more something I need to do.

10. VINYL, CASSETTE, CD, MP3, WEB STREAMING?
Not really bothered to be honest, depends where you are. i actually like starving myself of music, I don’t listen to music much at home, or when I’m walking. I like to keep it precious rather than a constant stream, so that if you walk into a room and Be My Baby’s playing it sounds like something that dropped out of heaven.

11. INDIE MUSIC IN THE AGE OF THE INTERNET?
Can’t see much difference really, apart from easier access. Such a sea of music out there. It’s just different, no better or worse as far as I can tell. Indie music in the age of interplanetary travel? Indie music in the middle ages probably involved a lot of walking from tavern to tavern.

12. WHAT IS YOUR PERSONAL MOTTO?
Muttered, panicky swearing.

On November 18th 2016 the German independent record label Clouds Hill released worldwide James Johnston’s debut solo album “The Starless Room”.
The results are a revelation, and not just for James Johnston. Vast in its scope, visceral, intimate and instinctive.

“I just followed whatever triggered an emotional response in me”

The Starless Room represents a remarkable distillation of both his lyrical obsessions and prodigious, arguably under-acknowledged talent. Suitably, it’s the title track that encapsulates the romantic sweep of the record best, with its star at his most intense and Sebastian Hoffman’s string arrangements at their most ambitious. For James Johnston, however, the greatest pleasure of all is a simple one: the songs’ slow tempos.

“Something I adore, like a lot of the Isaac Hayes or Ray Charles albums that I love. It almost feels like I’m listening to someone else’s record.”

But it’s not. It’s James Johnston’s debut solo album, The Starless Room. Like he said, it feels just right.

“It felt right, and when that happens, you just go with it,”

says James Johnston of his decision, well into a third decade as frontman of Gallon Drunk, to record The Starless Room, his unexpectedly sumptuous, long-awaited, debut solo album. Over eight albums, Gallon Drunk have carved out a reputation as a savage live act whose work has increasingly revealed a bold sophistication, growing from the psychotic fury of 1991’s You, The Night… And The Music up to 2014’s epic The Soul Of The Hour. A solo album by their co-founder, though?

That had somehow never come to pass. Especially one this lavish:

“It wasn’t something I’d really considered before,”

Johnston admits, and even now he appears a little startled by the turn events have taken.

“But that’s where the writing was going. I’ve always poured all my ideas into Gallon Drunk, but we’d done two great records in fairly quick succession, and I really didn’t want to repeat myself, so I was writing in a different way, one that didn’t feel like it would work as Gallon Drunk. The moment the decision was made to go ahead with a solo album it freed a lot of things up for me, letting it go somewhere different without any constraints or expectations.”

If Johnston’s taken aback that he’s finally recorded his first solo material, that’s far from the only surprise provoked – The Starless Room is distinguished by its grandeur and romance as much as its refreshing musical approach. Opening with ‘I’d Give You Anything’, Johnston’s wide-eyed declaration of love – “We’re bound together now/ Like a second soul” – made more joyful still by the choir that joins him, and ending with ‘When The Wolf Calls’, his soothingly subdued voice accompanied by rippling piano lines, it finds the man transformed.

Where he once seethed amid distorted guitars, raging saxophones and a brutal rhythm section, now he sounds like he’s emerged from a dingy, dirty basement, blinking and blissful, to discover a previously undetected world of sun-bathed optimism and beauty.

“Love is the binding for the whole album,”

“How it can become your world, and conversely distance you from the world too…”

But if it sounds like he’s softened on this album, he argues powerfully otherwise:

“The band’s records have quite an earthy feel, but in a way this is rawer, more focused and direct, musically and emotionally. The last Gallon Drunk record‘s my favourite, and it was certain elements of that which I really wanted to take further, to strip away the dissonance and anger, to reject the more familiar sounds in order to free it all up again. So the instrumentation is very different, led by piano and voice, and the overall sound is lush yet intimate. Overall it’s far more reflective of me, both as a person and the sort of music I actually listen to.”

As well as playing with Gallon Drunk, James Johnston has spent considerable time working with others: A mid 90s spell as a touring guitarist in The Bad Seeds led to a full role in Nick Cave’s band between 2003 and 2008, and he’s performed regularly with other iconic acts, including Lydia Lunch, Faust, and, currently, PJ Harvey, on whose The Hope Six Demolition Project Johnston appears.

Given the licentious nature of much of his previous work, that this newly mature, refined sound is indicative of Johnston’s character may be unforeseen. His influences, however – “Big Star’s Third, John Cale’s 70s albums, Lee Hazlewood, Nina Simone, that sort of thing” – remain much as they were, if arguably employed with a new, more thoughtful perspective.

Furthermore, his considered approach is indicative of a man with a musical education, both formal and informal. Growing up in Guildford, thirty miles from London, he sang in the city’s cathedral choir, while a music scholarship earned him free violin and piano lessons.

(“I gave those up fairly quickly when I got a guitar!” he laughs.) Meanwhile, his brother Ian – author of acclaimed biographies of The Cramps and Nick Cave – helped immerse him in

“a fantastic collection of records. When I was 13 or so, I’d be singing Thomas Tallis or Fauré, then going home and listening to PiL, The Velvets, John Lee Hooker…”

Johnston believes these interests have always manifested themselves in his work.

“Even the walls of feedback that featured so much in early Gallon Drunk,”

“can have an almost otherworldly choral sound.”

He concedes, though, that The Starless Room represents a departure for him.

“It’s more personal to me, and the nature of the music demanded a very different lyrical and vocal approach. I was writing at home on the piano, purposefully so, to get away from guitar song-writing habits, and without rhythm tracks to give the ideas more breathing space and scope as to what we could do with them in the studio. There’s a lot less to hide behind, which at first was quite daunting, but, as I really got into the challenge of it, the sound and feel of the album started to emerge and grow, helped along and encouraged by Johann Scheerer (also the producer behind Gallon Drunk’s last two records). He encouraged me to strip away as much as possible and get it down to the bare essential song, something I’d never usually have the confidence to do. But I loved the process: find the essence, and then develop the arrangements.”

As so often with Johnston’s work, London provided a crucial backdrop, even if this time his lyrics are a little more opaque.

“My wife and I live near Waterloo,”

“so I’d walk along the river to Tate Britain every day, and sit in an empty room with a view of the Thames and a pile of rough notes and ideas to see what came. I was trying to reflect my life as it is, my life in London – or at least use that as the starting point – but, through the prism and necessities of songwriting, to try and bring some mystery and uncertainty to it too. I certainly didn’t want to sing a diary.”

Johnston’s principal muse may be the UK’s illustrious capital – and his life therein – but he also shyly credits more cerebral inspirations, including Guillaume Apollinaire, Tarjei Vesaas and Jose Saramago, who, he says, helped him find appropriate moods. The album itself, meanwhile, was recorded at Clouds Hill
Recordings, just outside Hamburg, in an old industrial building right by the River Elbe.

“I’ve worked there twice with Gallon Drunk and once with Faust, always with Johann Scheerer, so I feel very at home. To be honest, I was so immersed in the process that I barely left the building during the whole recording.”

He was joined by another familiar face, however: Gallon Drunk drummer Ian White, though he too was forced to adapt his style.

“His playing’s beautiful on it,”

“with a gorgeous drum sound, more about creating an atmosphere than driving the songs. Another benefit of more space within the music is you can really hear all the subtleties of the playing.”

Consequently, The Starless Room is full of dramatic imagery – principally of darkness and light – even while its greater meaning remains elusive. He sings of “a lunatic moon on the rise” (‘The Light Of Love’), of “wind torn trees and sweet amber light” (‘Dark Water’), of a place “where the old worlds open and breathe” (‘Heart And Soul’), and of “lovers’ silver morning and its shattered light” (‘Let It Fall’).

He’s arguably at his most evocative on ‘St Martha’s’, where, drenched in sublime, understated strings, he conjures up memories based on a photo of a place about which he will only reveal that it has “a massive amount of emotional resonance for me”: “Now overgrown/ Chalk sand and stone/ And we could fall for miles/ All we know/ A Kodachrome/ And it’s edged in white/ And the summer light/ In a paradise.”