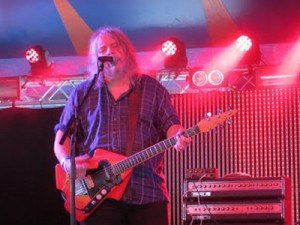 1. QUALIFICATIONS?
Various school exams, certificate of education which qualifies me to be a teacher.
2. CAREER HIGHLIGHTS?
I would say the first tour of the USA fulfilled a few dreams. Playing at The Queen Elizabeth Hall, London as Country Joe’s backing band was brilliant. Doing Glastonbury this year. Just being able to play in venues round the world, and having people buying my records is a great privilege.
3. AMBITIONS?
Well, I’ve never played Japan or Australia, or S America, so it would be nice get over there someday. I always fancied playing at The Roundhouse in London, since I spent so much of my teenage years watching amazing bands there. I would have liked to have played The Marquee for the same reason, but that’s not going to happen now.
4. SONGS YOU WISH YOU HAD WRITTEN?
Well, there are a lot of songs I really admire for their tunes and lyrics, but I don’t wish I’d written them. You’ve got to have something to aspire to, haven’t you? ‘People’s Parties/Same Situation’ by Joni Mitchell, ‘Shipbuilding’ by Elvis Costello, a whole load of songs by David Ackles, The Beatles, a couple of Teenage Fanclub songs, ‘The Lady’ by Sandy Denny, some Country Joe, the list is endless…
5. DESERT ISLAND DISCS?
I think you’re allowed eight, but I’m having ten, so: ‘Loud Green Song’ by Patto, ‘Candy Man’ by David Ackles, Strawberry Fields’ by The Beatles, ‘I’m Not Your Stepping Stone’ by The Flies, ‘Youth Of America’ by The Wipers, ‘Laughing’ by Dave Crosby, ‘1983’ by Jimi Hendrix, ‘I Had Too Much To Dream’ by The Electric Prunes, ‘Talking About The Good Times’ by The Pretty Things, ‘Tribal Gathering/Dolphin’s Smile’ by The Byrds.
6. FAVOURITE ARTISTS/BANDS OF ALL TIME?
The Beatles, Jimi Hendrix, Patto, David Ackles, The Byrds, Country Joe & The Fish, The Wipers, Love, Spirit, Sandy Denny, HP Lovecraft, Mad River, Clear Light, Dave Crosby, The Shadows, The Pretty Things, The Wipers.
7. WHAT MUSIC ARE YOU LISTENING TO NOW?
Mostly old stuff, lots of 60s beat singles and some 60s soul 45s, but I just bought Sharon Van Etten’s album with ‘Serpents’ on it. Really like that song.
THE LAST BOOK YOU READ?
I just re-read ‘London Blues’ by Anthony Frewin. Absolutely brilliant. But I usually have a few books on the go. Some of Conan Doyle’s short stories, Graham Nash’s autobiography, some good, but lightweight detective stuff by a guy called David Dickinson.
9. HOBBIES?
Football, music, architecture, antiques, art, literature.
10. VINYL, CASSETTE, CD, MP3, WEB STREAMING?
Vinyl of course.
11. INDIE MUSIC IN THE AGE OF THE INTERNET
Not sure what this one means…
12. PERSONAL MOTTO?
I have a few: ‘everyone’s alright, till they’re not’, ‘Never say anything about anyone to anybody, unless you don’t mind them finding out’, ‘if it doesn’t sound true, it probably isn’t’. Etc Etc 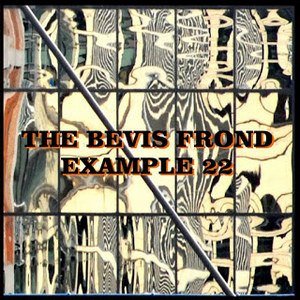 Example 22 is psych rock veterans the Bevis Frond’s third album since returning in 2011 after a seven-year hiatus. As with the Frond’s previous two albums, frontman/songwriter Nick Saloman (who founded the group in 1986) is joined by longtime collaborators Paul Simmons (guitar), Adrian Shaw (bass), and Dave Pearce (drums). As to be expected, the album is another sprawling epic stuffed to the gills with eight-minute acid-fried guitar jams and concise, hook-filled three-minute jangly pop songs. As overwhelming as the group’s albums seem, especially when they contain well over a dozen tracks and/or songs with extended lengths (their previous effort, 2013’s double-CD/triple-LP White Numbers, concluded with a 42-minute jam session), they remain pleasant to listen to, thanks to Saloman’s songwriting smarts and guitar prowess. Example 22 features a few extended guitar workouts, but it mostly focuses on the group’s most accessible side, generally consisting of succinct three- or four-minute pop songs. The organ-driven “Hot Sauce or Nothing” finds Saloman at his most Elvis Costello-sounding, while the brief “Winter Breaks” is urgent post-punk reminiscent of the Wipers, one of Saloman’s acknowledged influences. Tracks like “I Blame the Rain” contain muscular, Hendrix-inspired guitar heroics, while “Vital Signs” and “Longships” point toward the group’s mellower folk-rock side. Latter-day Bevis Frond sounds far more polished and hi-fi than the project’s early works, which were primarily recorded by Saloman at home on his four-track, and often indulged in his most meandering tendencies. Example 22 dials back some of the weirdness for a lengthy but approachable set of solid, eclectic psych rock that sounds as fresh yet familiar as any of the Bevis Frond’s other recordings.