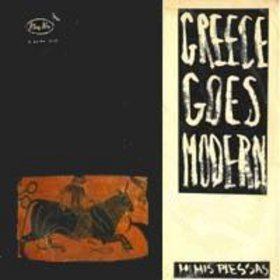 It’s been exactly 45 years, since the first release of “Greece Goes Modern” by Mimis Plessas & the Orbiters .

In this album, Mimis Plessas, with the help of his talented musicians, managed to combine in a unique way, the Greek traditional folk tunes with pop  arrangements and jazz feeling. The result sounds fresh and modern until now, so it deserves the qualification of classic in Greek discography.

This re-issue (B-Otherside Records, BSR 027/BVS 1002) – is valuable for one more reason: it’s been remastered from a 45 years old,  vinyl copy, that has been found in excellent condition, since the master types had been destroyed. “Greece goes modern” re-issue released in December of 2012, in 300 numbered copies (150 black vinyl and 150 white colored vinyl) and it was sold out in a few days. In February 2013, there will be a second -and last- edition  in white coloured vinyl.

The re-issue includes insert with an interview of Mimis Plessas and rare photos of his personal archive.